Our hardware store in Essex, VT, Bibens Ace Essex, was built from the ground up.  Located inside the Essex Outlets, it boasts large selection of Weber grills and Traegers, as well as the usual staples of our other Bibens Ace locations, including The Paint Studio.  Come check out our giant selection of Milwaukee hand and power tools, and see what the fuss is all about.  And don’t miss our plethora of holiday decor in the winter! 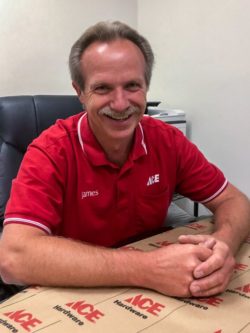 James Deberville is a family man who resides in Washington, VT.  James married his high school sweetheart Annette and together raised three kids and now spoil five grandchildren.  He has a passion for horseback riding and is currently President of the Dog River Horse club. His pastime consists of equestrian riding, swimming and skiing.

Right out of high school, he began his retail journey.  He started by stacking lumber, selling doors and windows, and eventually designing full kitchens.  This experience allowed him to grow and take on more responsibilities over time, where he now manages a well-established and growing hardware business.

He has been a part of Bibens Ace since the grand opening of the Essex store in 2008 where he fostered teamwork amongst the Essex staff to ensure that their customer service, product selection, and atmosphere meets the needs of all of their customers.  So stop in have some popcorn and let us help you with your projects.  With either in store stock or special orders, Ace is the place.